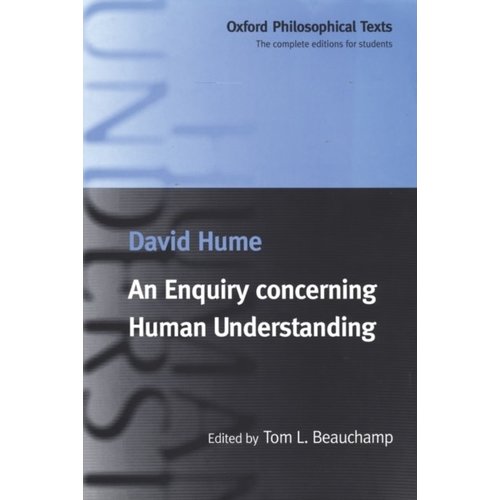 Oxford Philosophical Texts Series Editor: John Cottingham The Oxford Philosophical Texts series consists of authoritative teaching editions of canonical texts in the history of philosophy from the ancient world down to modern times. Each volume provides a clear, well laid out text together with a comprehensive introduction by a leading specialist, giving the student detailed critical guidance on the intellectual context of the work and the structure and philosophical importance of the main arguments. Endnotes are supplied which provide furthercommentary on the arguments and explain unfamiliar references and terminology, and a full bibliography and index are also included.The series aims to build up a definitive corpus of key texts in the Western philosophical tradition, which will form a reliable and enduring resource for students and teachers alike. David Hume's aim in writing An Enquiry concerning Human Understanding (1748) was to introduce his philosophy to a European culture in which many educated people read original works of philosophy. He gives an elegant and accessible presentation of strikingly original and challenging views about the limited powers of human understanding, the attractions of scepticism, the compatibility of free will and determinism, and weaknesses in the foundations of religion.Hume's philosophy washighly controversial in the eighteenth century and remains so today. The text printed in this edition is that of the Clarendon critical edition of Hume's works. A substantial introduction by the editor explains the intellectual background to the work and surveys its main themes.The volume also includes detailed explanatory notes on the text, a glossary of terms, a full list of references, and a section of supplementary readings.